Does Session Initiation Protocol (SIP) leave you as befuddled as quantum physics or molecular gastronomy does? Let InteractiveIntelligence’s Richard Brown throw a little light on the matter.

Hopefully you’ll already have heard about SIP. If you haven’t, you will most certainly have heard about network  elephony, voice over Internet protocol (VoIP), voice over net (VoN), or whatever a vendor may call it. Personally, I like the more general approach of VoN, but feel free to translate VoN in to VoIP or Internet telephony if you so desire.

Session Initiation Protocol (SIP) – for those who don’t know – is simply a way of setting up and controlling calls in a VoN
environment.

Since telephony was first implemented, not much has changed about placing a call between two end-points. Those infamous string and empty cans can still only talk to each other, and basically the same applies to two conventional telephones with just a wire between them – you can have just one session.

To have more phones talk to each other – that is, to set up sessions between any two telephones – you attach them all to switch and let the switch connect them. Remember that this is still only capable of running two at a time, however. This is what your PBX does; it sets up and manages the sessions in which you talk.

To make a call, sound hits a microphone and is translated in to an electrical current, which at the other end of a voice session moves a speaker. This is the same as half a voice conversation (half duplex); do the same thing the other way simultaneously, and you have a full duplex voice conversation.

In a digital environment, you insert an analogue to digital (AD) converter just after the microphone, and a digital to analogue (DA) converter just before the speaker. In between you send the audio as data packets. Your office phones and digital PBX have been doing this for years.

Introducing a local area network (LAN) as the medium that carries the voice-data packets is just a matter of using equipment you already have and that does that job very well. And this is where the VoN phone comes in – it translates the audio into packages of data and sends them onto your data network. But where should it send them?

Imagine you attach two VoN telephones to your network. For these two telephones to establish a conversation they need to set up a voice connection. As you may be aware, all network devices in the world have a unique address, which in the world of IP is translated into an IP address. For one of these phones to call the other, you key in the IP address of the remote phone, press dial and the remote phone will ring.

However IP address are not very easy to remember, and we tend to like something more along the lines of a four-digit extension to dial. You could program each phone on the network to do something like the table below, but it would be easier for you to put the table in a central register, and that’s why we need SIP, or something like it. SIP, after all, is
responsible for enabling devices to connect to other devices over a network.

Powering on a SIP device such as a SIP telephone will register it with a registrar server that keeps track of all SIP devices. Instead of telling each phone where to place the call when you dial 2345, the registrar server will maintain this information centrally.

Now, when you dial the same number, your SIP phone asks the registrar server where that number is registered and is then sent the IP address of the receiving device. Now the SIP phone can go ahead and set up a SIP session between the two devices, and you have yourself a voice conversation. Assuming the SIP devices are using the same registrar server, that’s all there is to it.

In other words, SIP is basically another way of delivering PBX type services – only the service in question is limited to the Internet. Naturally, there is money to be saved by maintaining only one network – the LAN – compared to also having a telephone network. But remember it also moves a lot of the responsibility onto the IT staff that maintain your network. A data network carrying voice traffic is not just a data network; it will now need to be designed and maintained properly. On the upside, such networks consist of many small units (see diagram below), and – designed properly – only a small number of users will be affected if any of these units crash.

You are probably wondering what good all this is going to do for your call centre. In truth, a SIP device is any device that can initiate or receive a SIP call. Your IVR, ACD, your recording server – or any other system you communicate with – could be a SIP device. That means you can physically place it anywhere on your network, or even on the Internet.

Similarly, you can place call centre agents anywhere you want, which will let your call centre service ‘follow the sun’, giving you a 24×7 service as your agents can be placed at home. Delay is not an issue because you can place your IVR servers geographically close to customers. And it means that the agents you have in different call centres can be in the same ACD groups without investing in leased lines, pre-routing equipment, and so on.

All you need to do is tie your call centres together in a network through any number of wide area network (WAN) technologies, through the Internet connection you already have. A 100 Megabit per second connection will carry approximately 1,000 voice
conversations without compression – four times as many as when using compressed communication.

Quality of service (QoS) is of course an issue, so carrying all your voice traffic over the Internet may not be a good idea for your premium service. But for some of your work, low quality service is better than no service at all. And, on that note, QoS could also translate to ‘quality of business service’ – and there is a lot of good to be said about the scalability, availability and feature-richness of a system that is based on standard computing components. It can spread with your business and provide the addition of features at the pace that only an open environment will give you.

A word of warning: SIP is not without limitations, and because it relies on standardisations, it can be relatively slow to evolve compared with the offerings of companies who choose their own ‘standard’. That said, it does ensure you a vast selection of suppliers to choose from. Moreover, as telcos are beginning to deliver SIP trunks, your company can tab directly in to the relevant telco’s network and let them worry about things like fault tolerance on gateways and how many voice channels to establish.

For instance, you can have a SIP trunk in different countries hook in to the same SIP server and thus have a presence in several places for the cost of a phone number. I pay around €1 per month for mine in Denmark.

How does SIP work in practice?

H.323, MGCP and Skype are names of other solutions to the same problem – how two end-points locate each other. But SIP was created by the Internet Engineering Task Force (IETF) and thus uses the Internet Protocol (IP) as its base. To you this means that there are no immediate borders to your network. Where H.323 and MGCP are limited to calling devices registered on the same network controller, SIP will let you initiate a session to any SIP device on the Internet, giving you worldwide telephony functionality through IP. And because it is an open Internet standard, anyone can make devices and software that complies with the standard, because the standard is freely available.

The originating SIP phone asks the host where to place the call. The host may act as a SIP proxy, which – like any proxy – acts on your behalf. The proxy then asks the receiving phone to accept a voice conversation. If it gets an ‘OK’ back, it will tell the initiating phone what the address of the receiving phone is, and thus the initiator and receiver can set up a session between them. 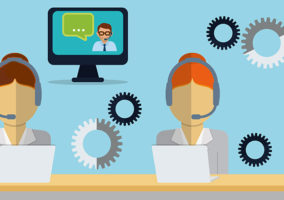 What to Look for When Buying - Unified Communications
Upcoming Webinars

White Paper: Why it’s Time to Leave Your On-Premises Call Centre Hardware Behind

White Paper: Why it’s Time to Leave Your On-Premises Call Centre Hardware Behind