In praise of the goal

On the 25th of May 1961, in a speech before the joint session of Congress, the President of the United States set his country a goal:

“This nation should commit itself to achieving the goal, before this decade is out, of landing a man on the moon and returning him safely to the earth” ~ John F. Kennedy

Orville and Wilbur Wright had only managed to get man off the ground for the first time 60 years earlier. They did this with some spare bicycle parts and canvas.  Consequently, this was possibly the biggest and hairiest goal of all time.  (Why goals are hairy is beyond me.)  It was a stretch.  Not the sort of goal that many managers would sign up to.

Yet only 8 years later the goal became a reality:

“That is one small step for man, one giant leap for mankind.” ~ Neil Armstrong

Setting clear goals and targets works.  I accept that one anecdote is hardly enough to prove the point. However, there is plenty of academic evidence to show that goal setting improves performance.

How does it work?

Locke and Latham suggest that having a target to work towards has four positive effects:

We can all decide how to spend our time.  Setting a target helps guide us in our choices.  We invest more time in activities that are relevant to the target and less in those that are not.

A target can create the internal motivation to work harder and energise us.  Anybody who has ever set out to run a marathon will know exactly how this works.

Persistence is related to effort, but over the long term.  If we have a clearly defined target then we are likely to be more persistent in chasing it down.  We are less likely to give up.

Finally, if we have a target we think about it.  Then we set about changing our behaviour and learning new skills to help us meet it.

Locke and Latham also demonstrated an interesting phenomenon.  Goals that are both specific and hard to hit increase performance far more than goals that are not.

In their book “Built To Last: Successful Habits of Visionary Companies” Collins and Porras showed how powerful goals can be in organisations.  They coined the acronym BHAG.  A Big Hairy Audacious Goal.

“A true BHAG is clear and compelling, serves as unifying focal point of effort, and acts as a clear catalyst for team spirit.  It has a clear finish line, so the organisation can know when it has achieved the goal; people like to shoot for finish lines.” ~ Collins and Porras

So there you have it.  Goals and targets work…

Answers: I need some advice on abandoned call targets. Can you help? 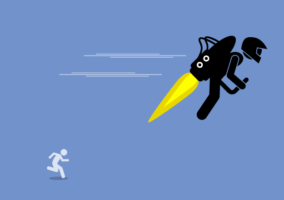 Answers: I need some advice on abandoned call targets. Can you help?